Tuna Aggregation in the Coral Sea

Tuna Aggregation in the Coral Sea

Australia’s north east coast holds some extraordinary tuna fishing when the annual aggregation of Big-eye tuna occurs in November/December. This phenomenon is known as the “boiling sea”, triggered by the annual spawning of the deep water Lantern fish. Big Game has had some incredible years out with this aggregation. We mainly target blue marlin were we troll 5x heavy tackle 130lb Penn 2speed outfits. We had all five reels screaming out drag at once during the 2010 Coral Sea aggregation, all with 25kg+ big-eye tuna!

Other targeted Big Game includes Blue marlin, Black marlin, Sailfish, Wahoo, Yellowfin Tuna, Sharks and Mahi Mahi. The most memorable trip was during the 2011 aggregation. The morning kicked off with a 900lb black marlin tagged and released by a first time angler. After an hour and a half battle, the lure spread was straight out again amongst the school of tuna and birds. That morning we tagged two more black marlin, a 700 and 600lber. We didn’t have any more marlin bites until later on the day, but the early afternoon delivered some great big-eye and yellowfin tuna fishing. The late afternoon bite was insane and had four marlin bites! We tagged and released another three marlin from this, a 600lb blue marlin and two smaller black marlin around the 300lb mark. What a fantastic day! 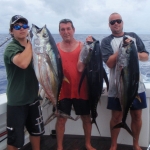 Dozens of friendly whale sharks are populated amongst the tuna aggregation. These gentle beasts are not camera shy and usually swim straight up to the boat to say hello. Big Game offers exclusive film opportunities for film crews and underwater photographers. All trips are customised charters that concern weather and aggregation arrival. We have direct contact with the tuna boats, giving us the location and weather conditions. 3-8 day trips are available. Please contact us for more information. 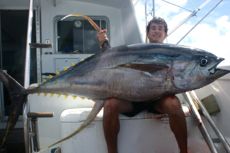 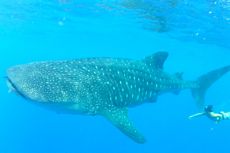 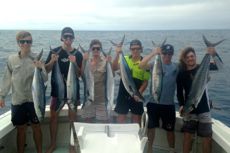 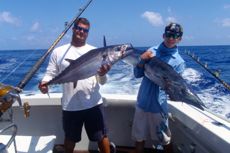 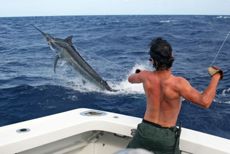 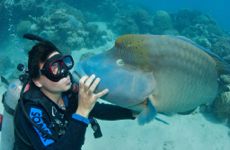 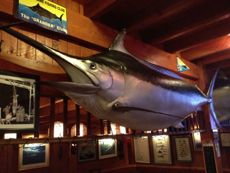